Matthew is a bizarre hurricane. It is moving slowly along the coastline with the potential for landfall anywhere from northeastern Florida to southeastern North Carolina, and landfall could happen multiple times. There is no other hurricane on record with a similar track!

Hurricane Matthew is expected to turn offshore after reaching North Carolina. This is because a high pressure system over the northern United States prevents the storm from moving further north. 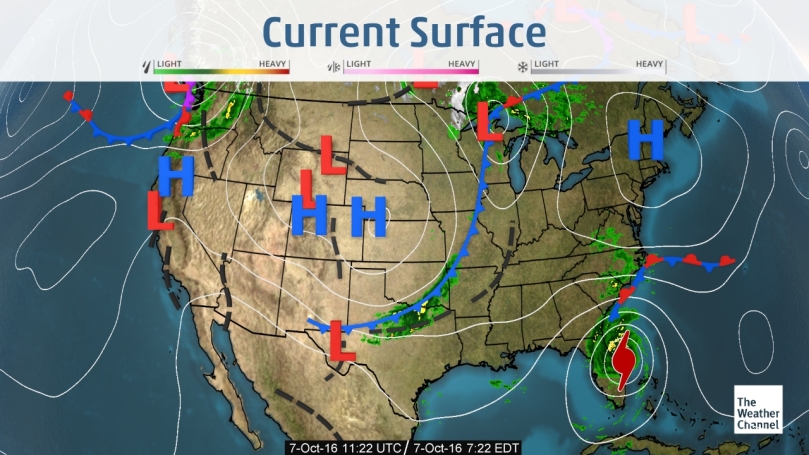 Because of the approaching Hurricane Nicole, Matthew is predicted to loop back in almost a complete circle and affect Bahamas and the east coast of Florida again. It should be significantly weakened than the first round, because the temperature and heat content of the ocean where it passed over are significantly reduced, thus providing less “fuel” for Matthew to strengthen again.

Hurricane Matthew is on track to become the first major hurricane to make landfall on U.S. shores since Wilma in 2005. National Hurricane Center (NHC) predicted Matthew could make landfall in Florida early Friday as a Category 4 hurricane. At the same time, Nicole to its east was just upgraded to Category 1 hurricane (Figure 1). 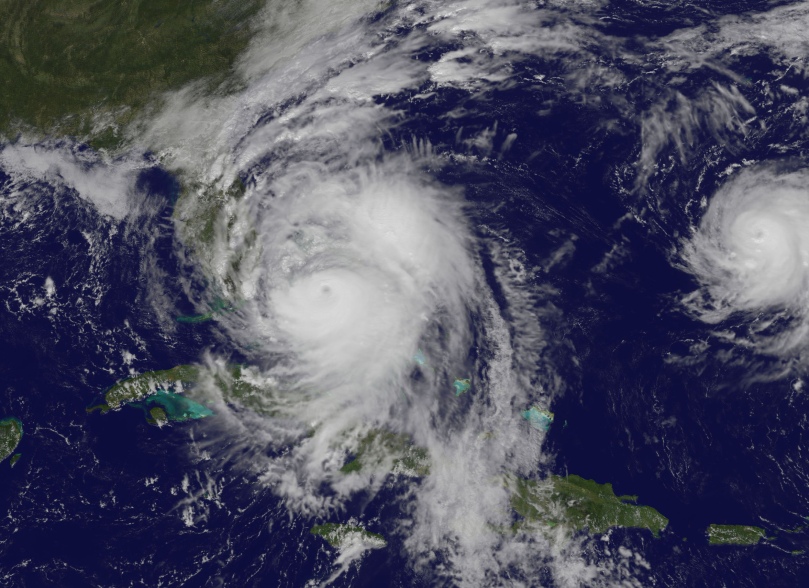 This is a rare phenomenon and how exactly the two tropical cyclones will interact with one another is too early to tell. NHC predictions suggest Nicole will likely nudge Matthew back to Florida and Bahamas again in a loop-de-loop early next week (Figure 2). The underlying three-dimensional ocean conditions will play a key role throughout this process. Accurately resolving the dynamic ocean temperature field and the momentum, heat and moisture flux exchanges across the air-sea-wave interface is in particular crucial for hurricane intensity forecast.

Figure 3. Snapshots of CNAPS predicted concurrent marine weather, ocean, and wave conditions at 21:00 EDT, October 6. 2016, showing Matthew is accompanied with strong wind, current, and wave; so is Nicole, albeit with smaller size and scale.

Near-real time model validations against HF radar surface currents and buoy measurements have been implemented and continue to be refined in CNAPS (Figure 4). 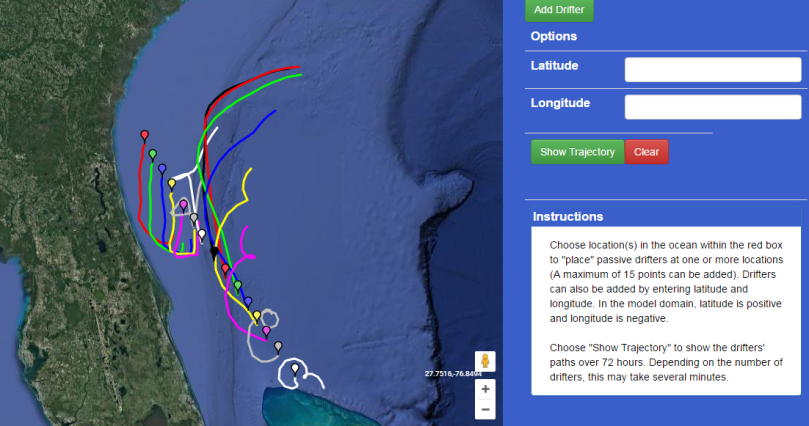 To check out CNAPS predictions of Matthew and Nicole, and their concurrent ocean circulation and wave conditions, use this link.

I’m excited about this new opportunity for experts in the SECOORA region to share information about major events, such as Hurricane Matthew.  Many in the region are under threat from this storm.  The SECOORA team sends our best wishes to be prepared and stay safe.

Additionally, the storm presents an opportunity for experts to share information, knowledge and data based on their expert scientific perspective.  I’m hopeful this blog will provide a learning opportunity for all of us that are watching and studying the storm as well as the models, data and other tools that are available to predict what might happen next.

Stay safe … and let’s get blogging!

Hurricane Matthew is expected to traverse through coastal ocean observing assets in the SECOORA region.

SECOORA and our partners are prepared and watching Matthew closely. For full details or more information please visit our Hurricane Matthew webpage where you can find over 20 resources from members and partners on Matthew’s current conditions, forecasts, modeled storm surge and more.

Disclaimer: The observational models and resources made available on this page are SECOORA partner contributions. If you are making an evacuation decision, please heed your local emergency management and the National Hurricane Center’s official forecast and the National Weather Service announcements.

Welcome to SECOORA’s blog! Our team is excited to start this new venture.

Posts will be written by the SECOORA team or invited experts in the coast and ocean sciences and will cover anything from new technology to insight on events in the region – such as hurricanes, red tide, etc.

Our goal is to use this platform to increase awareness of our coastal ocean and create an open dialogue.  We are committed to sharing coastal and ocean information from trusted SECOORA partners in the southeast region.

Please email abbey@secoora.org if you have any questions or are interested in writing a blog post. We welcome your feedback, comments and your ideas. Visit http://www.secoora.org for more information.

The information and resources made available on this blog are SECOORA and SECOORA partner contributions. If you are making an decision based on this information, please heed your local emergency management and the NOAA's National Hurricane Center's official forecast and the National Weather Service announcements.
Back to top
Loading Comments...
Comment
×